Group Interaction: a new strategy for understanding the music of Woody Shaw

It is no secret that I am a fan of Woody Shaw. More than any other trumpet player, Shaw’s solos, compositions, his fiery aggressiveness, have always captivated me as both a listener and a trumpet player.
While Shaw’s impact in jazz is well established in pedagogical circles, only a few writers have taken interest in deeper study of Shaw’s work (Gavin 2005), (Prouty 2004) (Richardson 2006), (O’Donnell 2009). The result is that while Shaw’s position in history is unassailable, it is also opaque. Regarded as ‘the last great innovator’, his innovations remain illusive (West 2013).
So far, the discussion on Shaw has focused on ways in which to adequately describe Shaw’s melodic style in terms of common practice jazz pedagogy. Simply put, writers—including myself—have tried to tie Shaw’s technique to the same chord-scale relationships used in learning bebop (Richardson 2006, 7), (O’Donnell 2009, 38), (Karns 2012). The results of these studies have yeilded only the most byzantine explanations for this music. Indeed, we have focused so much on this aspect of Shaw’s style that we have overlooked the more basic nature of his solos: the context in which Shaw’s lines were created.
So far, the discourse regarding Shaw’s improvisation has remained focused on individual solo lines outside of the context of group interaction. This provides an incomplete analysis, particularly if we are to have a meaningful discussion of the avant garde elements of Shaw’s style.
In order to better understand this music, I think it is beneficial to try a new analytical tactic: the study of group interaction. Like Ingrid Monson’s study of interaction in Freddie Hubbard’s “Blues for Duane” (Monson, 1998), I will study not only Shaw’s melodic output, but also the output of his entire group. In this context, passages that eschew traditional pedagogical analysis come into focus as being part of a sophisticated interaction between members of Shaw’s band. 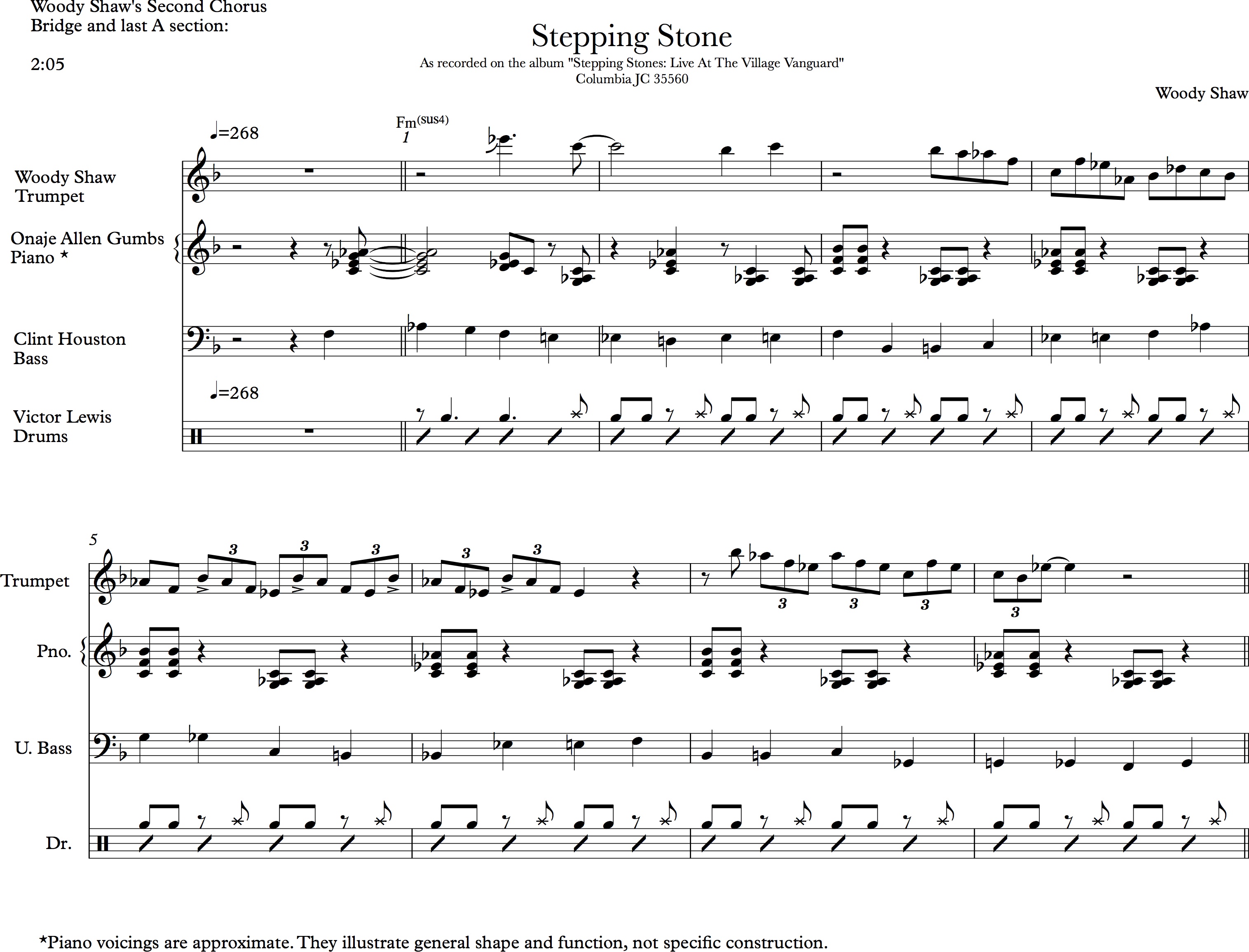 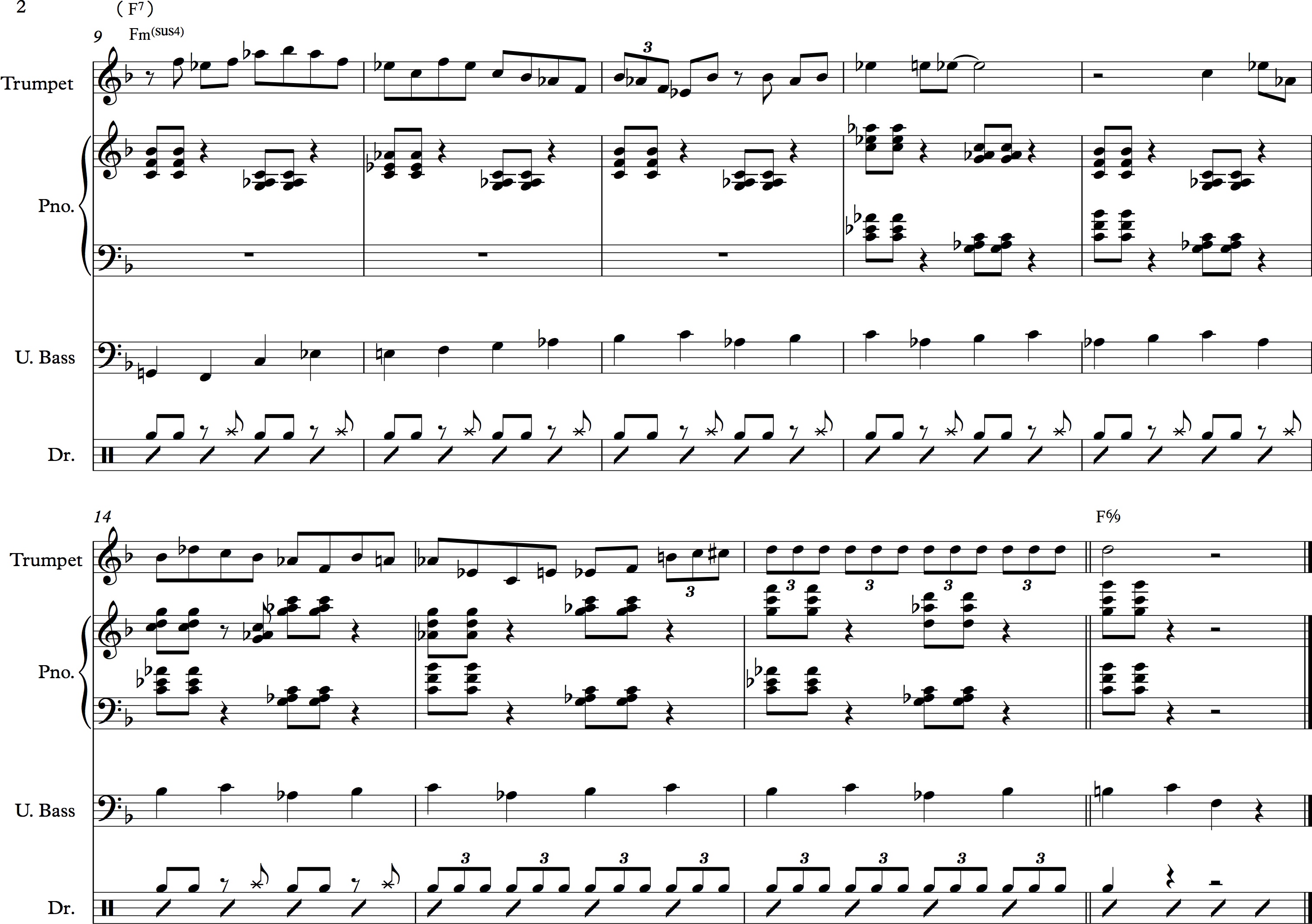 “Stepping Stone” is one of Shaw’s more modally static compositions. The form is thirty two bars; consisting of two eight measure A sections in F major, an eight measure bridge in F minor, and an altered final eight measure A section in F mixolydian.
At the bridge, Victor Lewis begins a comping pattern that clearly outlines beats one and three. The pattern is heard on the ride cymbal and snare drum. This figure is a departure from the previous swing patterns heard on the previous chorus and a half of soloing. Onaje Allen Gumbs quickly joins Lewis with a similar pattern in the piano, alternating between F-sus eighth note patterns that alternatingly bring out Bb and Ab on beat one.
The rhythmic clarity of this pattern heard in Lewis and Gumbs’ playing frees both Shaw’s solo and Clint Houston’s bass line. Shaw uses unevenly accented triplet patterns to diffuse bar lines in m. 5-8. Houston maintains walking quarter notes, but by the fifth measure has altered resolution of the root to fall on weak beats rather than on beats one or three (m. 6, m. 10.). This also places passing tones on strong beats. The overall effect further diffuses the bar line.
In the ninth measure of the excerpt, the harmony is supposed to go to an F mixolydian tonality, as evidenced by the previous two solo choruses by Shaw and Jefferson. Rather than follow this structure, the band collectively remains in the minor sus tonality and continues the bridge material through the end of Shaw’s solo in m. 17.
Gumbs begins his comping pattern in the bridge with two relatively simple voicings. By the end of the excerpt he has moved to much denser voicings (although there are notes doubled.) This technique provides more momentum to the already driving figure and creates an inexorable feeling of resolution towards the next formal section in m. 17. (My transcription of his voicings are approximate, I am confident in tonality, top voice and to an extent shape, however I do not claim that these are exact representations of his voicings. My transcription of his voicings serves to illustrate basic technique and interaction. They are not meant to be the last word on Gumb’s voicing structure in this excerpt.)
In the last eight measures, Houston supports Gumbs’ comping pattern and it’s implied point of resolution by altering his bass line in m. 12 and playing a ¾ hemiola moving towards m. 17. While this is the point of resolution for this figure, Houston does not resolve it as cleanly as Shaw, Lewis or Gumbs, instead diffusing his resolution to beat 3 of m. 17
Victor Lewis helps this build up of energy in m. 15 by abandoning the cymbal and snare pattern and instead playing triplets on the tom drum driving towards beat one of M. 17 and Carter Jefferson’s solo. Shaw reacts to these triplets almost immediately and responds with triplets of his own in m. 16.
This episode functions as a kind of pedal point.  Rather than pedaling over a bass note however, Shaw’s band is pedaling over a specific rhythmic figure that is developed to elevate the energy of the piece. Because of the clarity of this rhythmic pedal point, Woody Shaw and Clint Houston are able to manipulate perceptions of the bar line with sophisticated rhythmic patterns and voice leading.
CONCLUSION
This sort of analysis shifts perspective from melodic content towards melodic context. I am becoming increasingly confident that any kind of formalist attempt to categorize Shaw’s melodic approach will be incomplete unless context is taken into account.
If we disregard interaction in our analysis, the extent of Shaw’s rhythmic and melodic phrases remains obscured. Shaw is able to diffuse meter and tonality because of the way in which his band is interacting with him. This I believe is the key to understanding this music.

Monson, Ingrid. 1998. In the Course of Performance: Studies in the world of musical improvisation. Chicago: University of Chicago Press.