This year Ambrose Akinmusire has positioned himself as a new leader in modern jazz. His sophomore record for Blue Note “The Imagined Savior is Far Easier To Paint” has received overwhelmingly positive reviews from the jazz press (Barton 2014) (Woodard 2014, 26) (Chinen 2014). Since the release of “The Imagined Savior”, Akinmusire’s quintet has been headlining concerts and festivals across North America and Europe (Wilkins 2014). In addition, Downbeat Magazine has included “The Imagined Savior” in their list of top jazz albums of 2014, it lists as number two, beating out jazz heavies such as The Bad Plus, Tom Harrell, Sonny Rollins, and Chick Corea (Reed 2014, 46). It is safe to say that for the time being, Akinmusire is A Big Deal in jazz. Perhaps this is so striking because it represents a conscious departure from the neo bop movement that has prevailed in jazz for over three decades.
This presents a challenge for listeners and critics alike. The use of bebop and pedagogical models to examine Akinmusire’s work yields only limited results. This begs the question: What other perspectives can help us better understand Akinmusire’s work?
The first clue comes from Akinmusire himself. In promoting this project Akinmusire explains that his focus was on composition rather than on improvisation. According to Akinmusire, his goal was to integrate improvisation into a composition rather than to compartmentalize those elements (Akinmusire 2014). This statement seems to conform to the bulk of the record: collaborations with various artists such as UK based Singer Cold Specks or the OSSO String Quartet all feature creative arrangements of original music. However this mission statement is most apparent on the sixteen-minute live track “Richard (conduit)”.
This may not seem readily apparent to listeners. An initial pass through “Richard (Conduit)” will reveal avant garde textures and an opaque approach to time, harmony, melody, and form. Only thirty six measures of the sixteen minute long piece is made up of prefigured melodic material, the rest is devoted to improvised material. At first blush, this does not appear to be a composer’s track. However, the piece is highly structured. Ambrose and company spend most of the piece developing improvisation, but these improvised elements relate with each other in a way that defines form in a subtle yet sophisticated way.
How can a piece of music be structured when musical elements such as meter, hypermeter, pulse, and harmonic rhythm are abandoned? This is a fundamental question when dealing with any music that approaches the avant garde aesthetic. Akinmusire accomplishes this by using various textures as a compositional tool. In “Richard (Conduit)” Akinmusire avoids traditional structural objects in organizing the piece.[1] Instead, Akinmusire treats meter, pulse, harmonic progression, and instrument forces as formal objects. These elements bind the composition together.
This paper will argue that Akinmusire and company use combinations of musical elements to formally organize “Richard (Conduit)”. This presents a progression from free textures to conservative textures and back to free textures in a way that uses improvisation as the impetus to achieve structural organization.

It goes without saying that there are significant elements of the Avant Garde in “Richard (Conduit)”. But to dismiss this piece as being entirely emancipated from musical structure would miss the point. There is no point in the piece when all elements of music are liberated from one another. This is a situation common to most avant garde music. This brings up an important question when dealing with any avant garde music: how can we reconcile structure in “Free Jazz”?
The term Free Jazz is something of a misnomer. One would expect that when listening to so-called “Free Jazz” all players would be free from the rules and confines of straight ahead jazz. While the term may imply freedom, avant garde jazz is not a music of total freedom. This is of course an incomplete view of avant garde music and has been addressed by numerous authors. (Ekkehard 1974, 9) (Block 1993, 229). Instead, as traditional musical elements are liberated, the relationships between the remaining elements become more important.
For example, in the opening minutes of “Richard (Conduit)” Akinmusire and company have liberated meter, hypermeter, pulse, and harmonic rhythm. They are maintaining harmonic progression. This progression becomes much more important than it would have been, had the other musical elements been preserved. Indeed, this progression is the only thing linking the rhythm section with Akinmusire’s improvised trumpet solo. Conceptualizing the avant garde in this way, as the careful abandon of key musical elements is beneficial. It is not done purely out of a moral or personal aesthetic, but also to highlight the relationships between other disparate musical elements.
This sets us up to regard avant garde music as existing on a spectrum from conservative[2] towards free.[3] This is a model described by Keith Waters in his magnum opus “The Studio Recordings of the Miles Davis Quintet, 1965-68” (Waters 2011, 80). According to Waters music can move across this spectrum by preserving or abandoning one or more of five musical elements: Meter, hypermeter, pulse, harmonic rhythm, harmonic progression. This is perhaps the greatest tool devised for understanding avant garde music.[4]
In regards to “Richard (Conduit)” we can hear that Akinmusire moves across this spectrum throughout the course of the piece. As we will see, part of the mechanism that maintains listener interest throughout the piece is his progression from free to conservative and back. 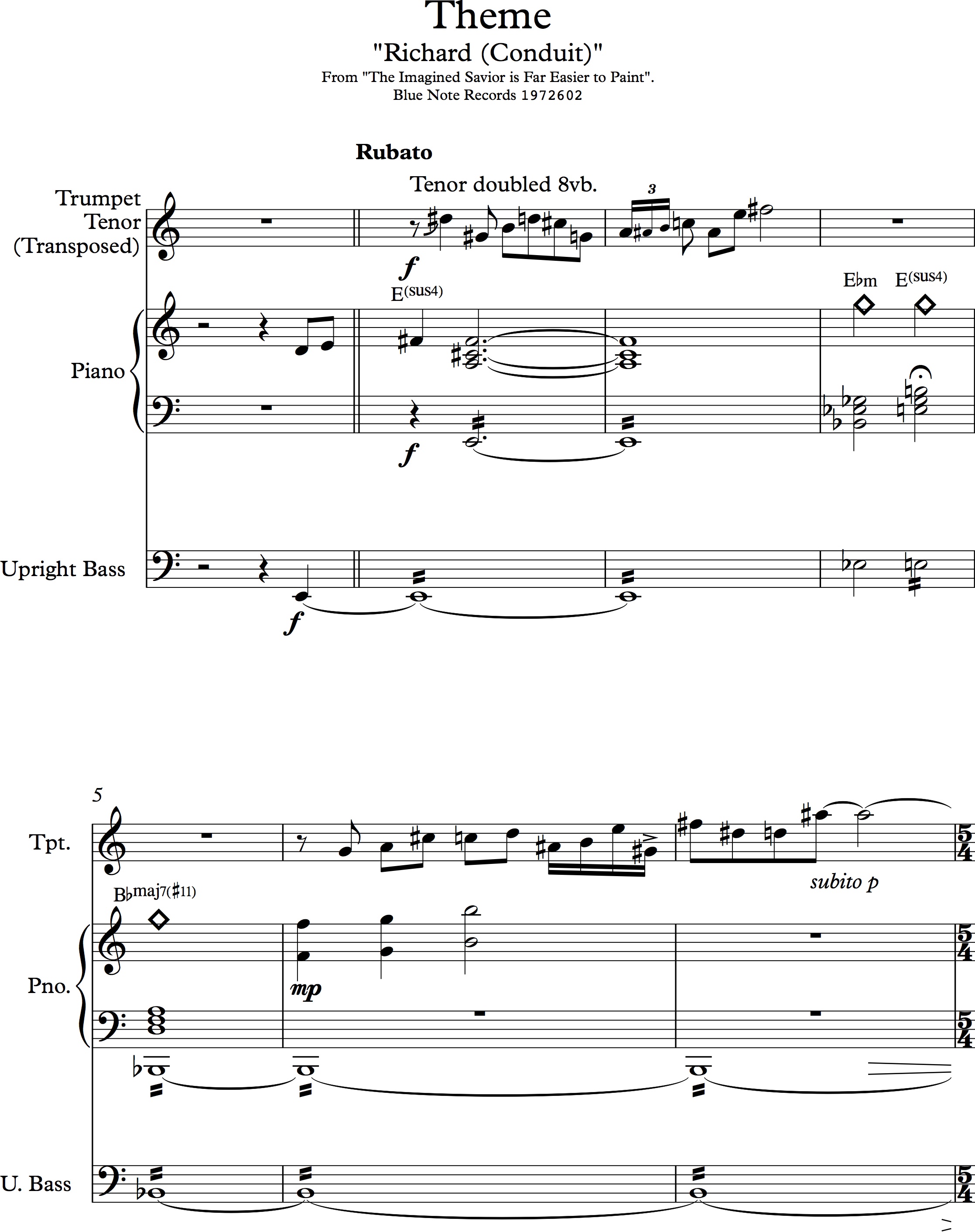 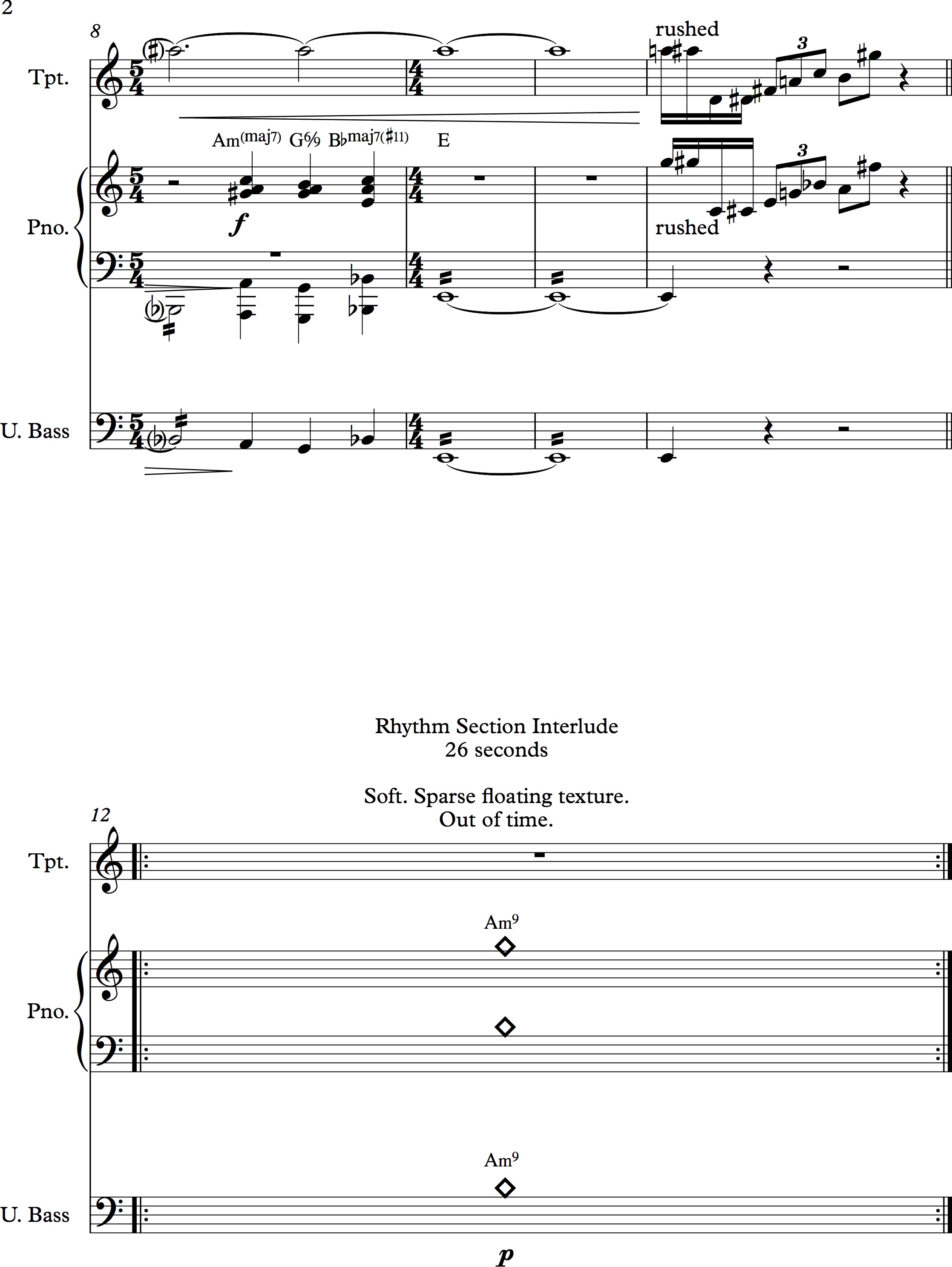 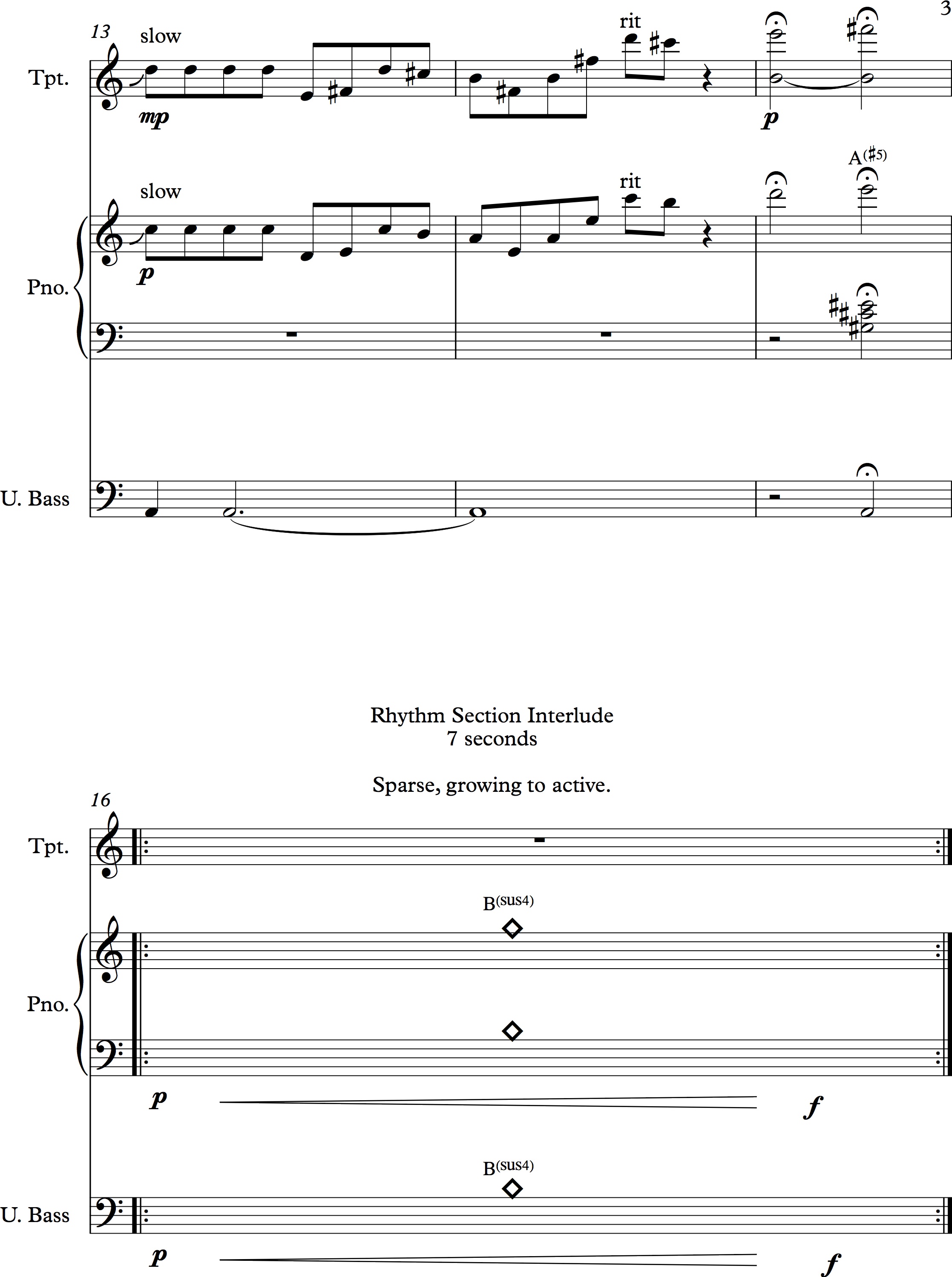 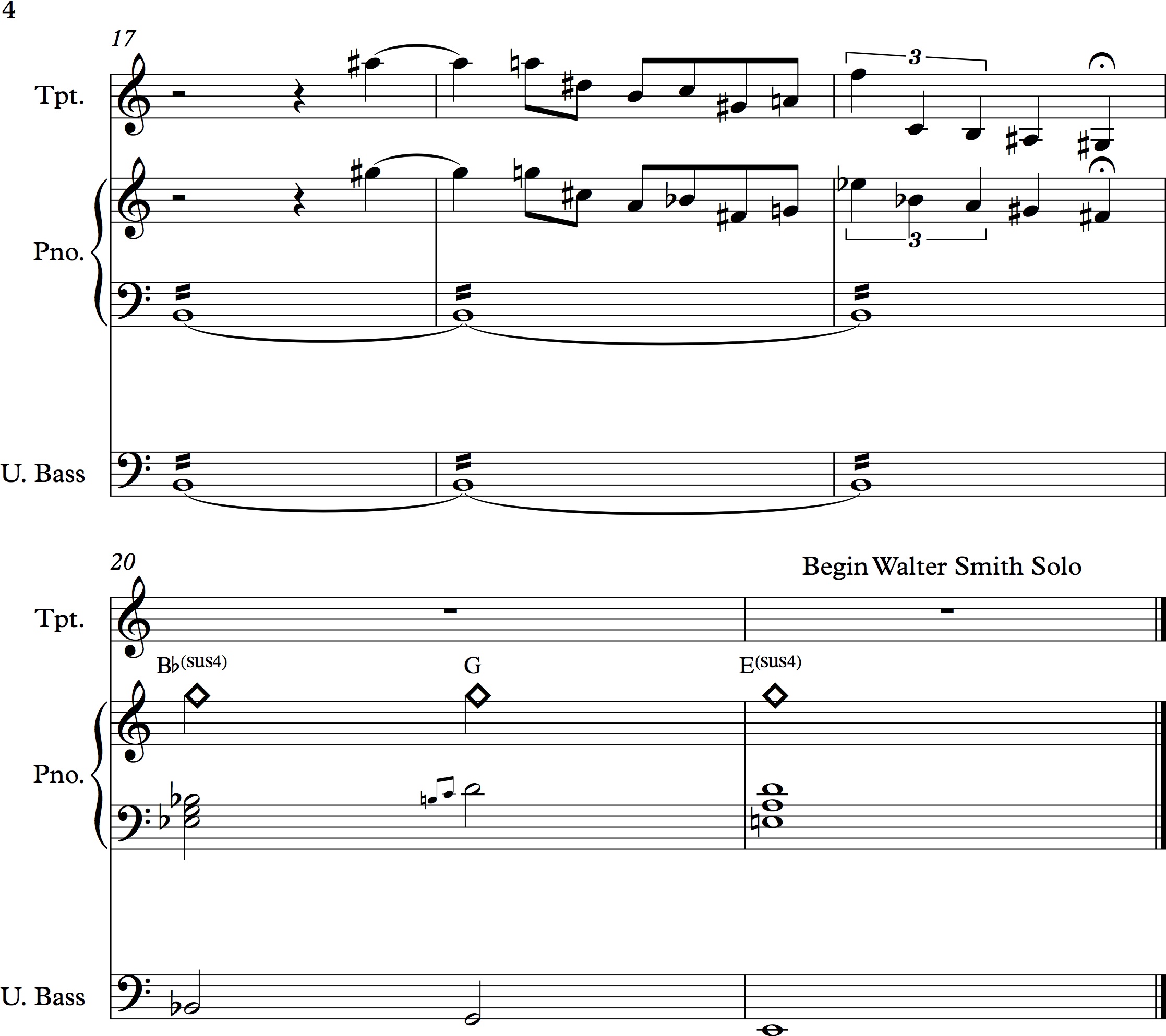 “Richard (Conduit)” begins with two minutes of improvising by Akinmusire. This improvisation sounds free, but rather than total freedom, the band has abandoned meter, hypermeter, pulse and harmonic rhythm. Akinmusire and company preserve harmonic progression during this section, moving through various pedal points.
These pedal points gravitate towards E. At time 2:21, Ambrose concludes his solo and pauses for a brief rhythm section interlude. During this interlude the rhythm section repositions the pedal point around E. This is done through a brief stop on a G pedal-the relative major of E.[5]
The E pedal signifies what I call the “incantation”. This material occurs prior to the theme at time 2:31 and prior to theme prime at time 14:03. I call this material the incantation because it features different harmonic, melodic, and rhythmic material than the other sections of the piece: in this section, Akinmusire, Sam Harris and Harish Raghavan ruminate on either an E or material implying an E minor tonality.[6] In both instances of the incantation, Akinmusire plays this material with the utmost of fire and urgency, contrasting his later interpretation of the theme.
The theme begins at time 3:29. It is made up of three short passages played by the trumpet and tenor saxophone in octaves. Because of the prominence of E in the incantation section as well as being the endpoint of the theme, I have chosen to display the theme in E major. I justify this by the presence of G# and B in the melody.
The first and last horn passages in the theme are chromatic. They are interspersed with a modal passage.[7] Each passage is followed by a rhythm section interlude. As Akinmusire and Smith move through these passages, the interludes become shorter.
The way the theme is played is also of interest. Akinmusire’s part calls for him to play in the upper register of the trumpet. Typical performance practice is for this material to be resonant and loud. This is done partly out of necessity and partly out of tradition. Unlike his interpretation of the incantation material, Akinmusire plays sweetly in the upper register with a soft diffused sound. He uses bends, doits and fracks to infuse these notes with emotion rather than fire. This technique is both intimately expressive and ties Akinmusire to Miles Davis who also broke ground with such tactics (Walser, 1993 353).
The first theme statement dovetails into Walter Smith’s solo. Smith’s solo develops the texture of the piece, moving from a medium texture to a thick texture. Like style, texture in this piece is never just thick or just thin, but constantly evolving on a spectrum.
Sam Harris’ solo signals the move away from avant garde textures. At time 9:13 the band begins to preserve harmonic rhythm, harmonic progression, and pulse. After a brief interruption from Akinmusire, Harris continues his solo and the band begins to preserve meter at time 9:59. At the same time the band begins a decrescendo in both volume and texture to conclude Harris’ solo.
By the time Akinmusire begins his solo at time 11:36 the band is preserving all five elements of style. Quickly after Akinmusire begins his solo these elements begin to become opaque. This section is interesting because while hypermeter, meter, harmonic progression, harmonic rhythm and pulse become weaker as Akinmusire’s solo develops, they never are truly abandoned. Here these elements are diffused rather than abandoned. One can consider a board fader controlling these elements that are being slowly turned down as the trumpet solo develops.
At time 14:03 the incantation returns but this time Smith joins Akinmusire and the rhythm section. The return of this material reveals the importance of the repeated E as a part in the form. Akinmusire again is playing in the upper register of the horn with all the fire and spirit he can muster. It is here that the group abandons meter, hypermeter, pulse, and harmonic rhythm. This signals a return to the textures heard at time 2:31.
The theme prime statement is similar to the theme statement. Here the theme is played with more fire and urgency; this is helped by shortened rhythm responses. It is here that we can be sure that these responses are in fact part of the theme’s form, as at time 16:02 we hear similar material to what we heard at time 4:47. 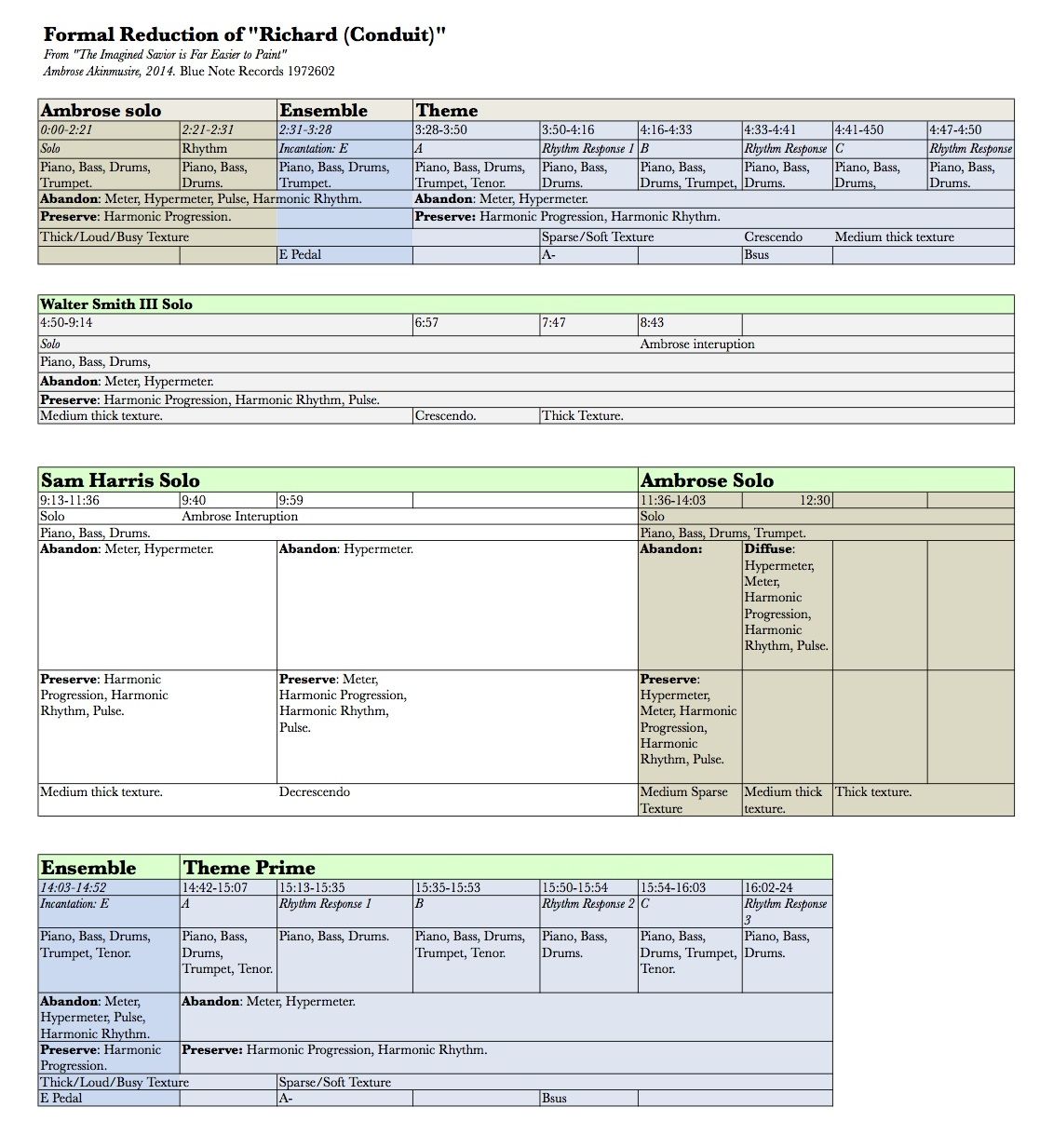 In a traditional sense, the composed material for “Richard (Conduit)” is very small. In a sixteen minute long piece, there are only thirty six measures of composed melodic lines.
The strength of this composition is not derived from prefigured melody. It is in its structure. Here Akinmusire provides a sequence moving through various avant garde textures. Because of the diffused nature of the melody, rhythm, and harmony of the piece, instrumental and rhythmic textures have a greater role in ordering the music.
Structure is created by three different compositional statements. The theme and theme prime statements offer a traditional model for structure and organization. Both appearances of the incantation prepare the theme statements by presenting contrasting texture and by establishing E as an important harmonic object in relation to the rest of the composition. These elements are tied together with the deliberate progression from free playing towards conservative playing, and back. In this way, Akinmusire is able to use various positions of avant garde texture to give weight to his compositional structure.

[1] For example, there are no true A, B, or C sections, at least not in a way that we are used to. There are formal elements that return, but with the exception of the two theme statements, this return is created by texture rather than melodic or harmonic content.
[2] By traditional I mean based on the conventions of bebop and hard bop.
[3] By free, I mean as Keith Waters does, the abandon of meter, hypermeter, pulse, harmonic rhythm and harmonic progression.
[4] I would like to note that just as Keith Waters points out in regards to Miles Davis Second quintet recordings, Akinmusire never plays truly free or truly conservative, rather he is positioned on a spectrum between those poles.
[5] It is unclear if the tonality on the E pedal is major or minor.
[6] Akinmusire plays E minor material to prepare and resolve the E.
[7] An application of pitch set theory to this material would be enlightening and is a promising avenue for future research.